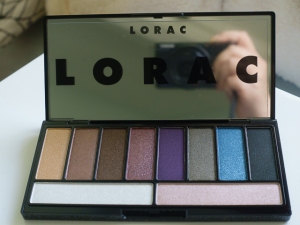 so it seems like i’m on a roll with eye palettes lately.  this is the second one i’ve picked up that’s become an instant favorite! the flaws are very few and the range of colors are my personal favorite combinations.  even more unusual for me, the pinks in this palette are ones that both visually appeal to me and actually work with my skintones!

let’s go over the flaws first, as that’s a short list.  first off, it’s all shimmer, no mattes.  this is actually not a huge problem for me as i love my shimmers and the only time i want a matte color is for my brow highlight.  i don’t mind digging out a matte single to pair with this palette. however, if you like your palettes to be able to stand on their own, this may not be the one for you unless you don’t mind a shimmery brow bone.  second, the pigmentation to the white shade is a little weak.  it’s visible, but it goes on a bit sheer.  last, the vibrancy of the purple shade is not as good as the rest of the colors and sheers out when blending, so you’ll want to do a little bit of layering.  the quality of the rest of the shadows are typical Lorac quality.  the shadows are buttery and blend out easily.  i didn’t experience much, if any, fall out (except with the It Cosmetics brushes i was testing)

Party Palette under the sun

Lorac didn’t see fit to name these shades (i hate that).  the two shades furthest to the left are the bigger highlighter shades from the bottom of the palette.  the colors are as follows:

now let’s see it in action!

Sage all over lid 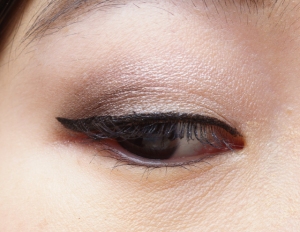 overall, i really love this palette.  i can create the rosy neutral looks that i’ve always lusted over in Urban Decay’s Naked 3 palette.  i have colorful pops of color.  there are two fairly neutral greens, which is my favorite way of creating a neutral look. the only thing i would change about it is switching out that white highlighter for a matte highlighter shade.  it’s small and compact but has a good size mirror.  the mirror has a stiff hinge, so you can angle it however you need.  this might be my favorite travel palette to date.  all i’d need is to pack a matte single for highlight, and i’m set for shadows.  it’s a palette i constantly reach for.  i like how the shadows work well together in different combinations or how most shades can double as an all over shade if i just want a quick look.  for just $24, this palette may be the best bargain in my stash!

Readers, what do you think of Lorac’s Party Palette?  how do you like to wear your favorite neutral look? 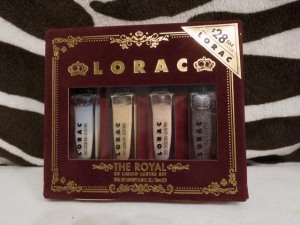 this wonderful holiday set from Lorac is still available on Amazon.com!  it’s a nice bargain considering the set is 4 full sized products for $28 when one full sized is $16.  they’re 4 limited edition colors: Opal, Rose Quartz, 24K, and Amethyst.

it’s a fast and easy way to execute a glittery look that opens up the eyes but not too over the top.  though i’ve seen video tutorials with this product where it’s applied using a synthetic brush, i find that it applies most evenly for me when i use my finger.  there is a little bit of glitter fall out during application but not much as it wears throughout the day.  ready to see them in action?

Opal looks like its namesake in the vial, but on me, it always looks opalescent blue.  it’s a little bit sheer but not sparse.  i think its sheerness helps prevent it from looking like a glitter bomb. 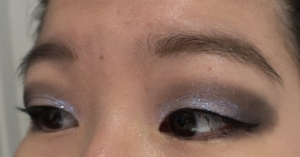 Opal on the lid and Rouge Bunny Rouge Aubergine Gunmetal

here’s the look in context.

Rose Quartz is a lovely pastel pink that looks a bit peachy on me.  i’ve seen it look true to bottle on other people though.  i think it pulls peach on me because it’s interacting with the yellow of my skin. 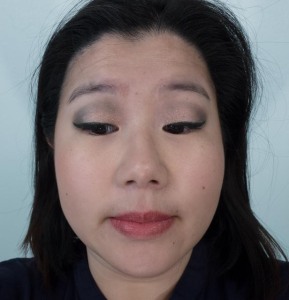 you can get it to show more true to bottle if you put a white base under it.

24K is my favorite.  it’s also the most opaque out of the 4 colors.  there is another gold in the permanent collection called Gold, but i’m assuming 24K is slightly paler, less yellow to continue the pastel theme of the Royal Set.  i don’t own Gold, so i can’t compare the two for you.  this is my definition of gold perfection.  i find the paler golds work with a wider range of colors and brings a certain understated elegance to the table than the bolder yellower golds.

lastly, there’s Amethyst.  Amethyst looks like a smokey lavender in the vial, but in actuality, it looks like a glittery steel grey with a tinge of lavender.  the formula has a little bit more fixation liquid than the rest in the set making it slightly harder to work with.  Cora of Vintageortacky suggests running a q-tip along the edge of the drop of product before using to help absorb some of the excess liquid, but i never remember this tip until it’s already half on my eyes.

Lorac 3D Liquid Lustre can be used in other places too.  some suggestions were as a highlight for cheeks or collarbone.  i’m thinking Opal will make a great fairy look next halloween!  if i were a normal makeup user, i’d being snatching up a backup of this.  i love how quick and easy it is, and i’m always getting compliments or people asking me what the product i’m wearing.

Readers, yay or nay on glitter?  how do you like to incorporate it into your look?

hi~ welcome! share my obsession with makeup, skincare and food!